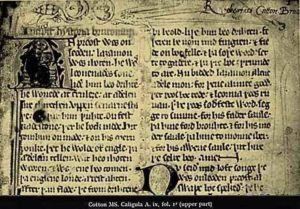 The introduction to Layamon’s Brut

In this episode, we look at the rivalry between John “Lackland” and Arthur of Brittany for control of the Angevin Empire.  John eventually emerged victorious, but in the process, he set in motion the events that led to the loss of Normandy and most of northern France. The loss of these territories produced a renewed sense of “Englishness” and a revival of English literature. This English renaissance was spearheaded by an English translation of Geoffrey of Monmouth’s “History of the Kings of Britain.”  For the first time, the legend of King Arthur was presented in English verse.