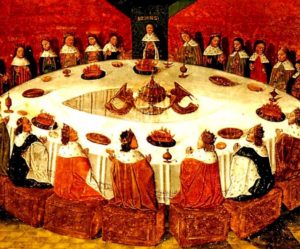 The first version of the King Arthur legend to be composed in English is found in Layamon’s 13th century poem called Brut.  In this episode, we explore Layamon’s version of the story, and we examine how the text reveals certain changes in the English language during that period.  Specifically, we look at new English words documented for the first time in the text, as well as grammatical and phonological changes reflected in the manuscript.

16 thoughts on “Episode 94: From British Legend to English King”