The first Greek and Hittite civilizations emerge from Indo-European tribes in the eastern Mediterranean. The Greeks adopt an early form of writing and fight the Trojans. An alphabet allows the ancient history of the Greeks to be recorded in the Iliad and the Odyssey. (Note: This episode was posted on October 31, 2020 and is an extended version of the episode originally posted in August, 2013. This episode includes approximately 25 minutes of material not included in the original episode.) 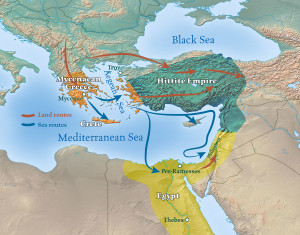