King Alfred is the only English monarch to be known as “the Great.” His struggles and ultimate victory over the Danes ensured the survival of the Anglo-Saxon culture and the English language.  In this episode, we explore the life of King Alfred and the historical events which led to the defeat of the Danes in Wessex.  We also explore the history of certain words related to topography. 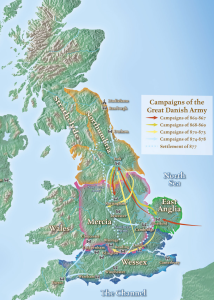