We look at the emergence of the Usatovo culture which spoke an Indo-European dialect believed to be the ancient ancestor of the Germanic languages – including English. We also look at the later migrations of the Indo-European tribes throughout Europe and Central Asia. 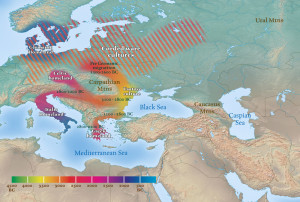 The emergence of the first Indo-Europeans and the early migrations of these steppe herders is examined.  The specific advantages favoring the expansion of these people is explored in detail.