During his reign as King of England, Canute established a new class of nobles who became known as earls. The authority of the earls was second only to the king himself. The king and the nobles ruled over the common people or peasants who were known as churls. The peasants tended to the farms, and their culture and lifestyle produced many words which have survived in Modern English.  We examine the etymology of words and phrases associated with farming, livestock, bread making and knitting. 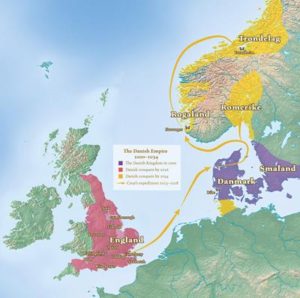 In this episode, we explore the Danish Conquest of England in the 11th century.  The Danish victory brought a temporary end to Anglo-Saxon rule, but it didn’t bring an end to death and taxes. We examine the etymology of words related to death, and we also explore the connection between high taxes and Modern English.

The decline of the Anglo-Saxon Golden Age occurred in the late 900s as the English kingdom passed from King Edgar to his son, Aethelred the Unready.  it was a period surrounded by many deals, contracts, bargains and treaties.  We examine the etymology of words related to deals and contracts. We also examine how literate Anglo-Saxons tried to balance the use of English and Latin.

The late 10th century and early 11th century was the Golden Age of Old English literature.  But much of the literature produced during that period was lost to history. Thankfully, a handful of book collectors realized the value of those old books and preserved an important part of the history of English. In this episode, we explore some of the important English texts from this period, including the Anglo-Saxon Chronicle and the Exeter Book.  We also examine the role of the bookworms and book collectors who preserved the literature of this period.

After the defeat of the Vikings in York, England was permanently unified under Wessex leadership. A period of peace and prosperity followed. Under the supervision of a cleric named Dunstan, the churches and monasteries were re-built and a great literary revival soon followed. In this episode, we explore the events which led to that literary renaissance which produced most of the surviving Old English literature. We also look at some of the Latin words which were borrowed after the Benedictine Reform. And we conclude with the development of the standard West Saxon literary dialect which emerged during this period.

Do you say ‘dived’ or ‘dove’? How about ‘shrank’ or ‘shrunk’? And when do you say ‘hanged’ instead of ‘hung’? We’ll explore the answers to these questions in this episode. The answers lie in the history of the English language – and specifically the distinction between so-called ‘weak’ verbs and ‘strong’ verbs.

‘To be or not to be?’ That may be the question. But where did the various forms of our modern verb ‘to be’ come from?  And what about other Shakespearean phrases like ‘he hath,’ and ‘thou shalt,’ and ‘fear not?’ In this episode, we explore the Anglo-Saxon or Viking origins of some of these common verb forms in early Modern English. We also examine the history of the English word ‘not.’

The Modern English pronouns were largely inherited from the Anglo-Saxons.  While many of them have survived intact, others have changed quite a bit over the centuries. Some disappeared, some new ones were created, and some were even borrowed from the Vikings. This time we explore the history of the English personal pronouns. We also examine the historical roots of the modern confusion surrounding the proper use of English personal pronouns.

In the 10th century, several factors came together in northern England which resulted in the loss of Old English inflectional endings. This was a fundamental change to English grammar which simplified word forms and led to a fixed a word order. We conclude this episode by examining the plural word forms used in Modern English, and examining how those plural forms evolved in the context of inflectional loss.

In the mid-900s, the English king battled a grand alliance of Celtic and Viking leaders at a place called Brunanburh.  The result was an Anglo-Saxon victory, and one of the more important poems composed during the Old English period. But the Anglo-Saxon victory did little to secure the region around York. The Viking influence remained strong there, and control of York passed between the English and the Vikings. One consequence of that prominent Viking presence was the continuing flow of Norse words into the northern English dialects. We continue to explore the influence of Scandinavian vocabulary on Modern English.