Like much of western Europe, England experienced a significant growth in population during the two centuries after the Norman Conquest. By the 1300s, the percentage of the English population who lived in urban areas had doubled. As towns and cities grew, jobs became more specialized. The rise of specialized occupations led many workers to adopt their occupation as a surname. In this episode, we’ll explore the job market of the 14th century, and we’ll examine the origin of many common occupational surnames.

The origin of modern naming conventions can be traced to the period immediately following the Norman Conquest. Prior to the Conquest, almost all people in England had a single Anglo-Saxon name.  After 1066, parents gave their children names borrowed from French and from the Bible.  People also started to acquire second names based on their landholdings, place of origin, parent’s name, or some personal characteristic.  These were the beginning of many modern surnames. In this episode, we explore the history of English names, and we examine how naming conventions reflect the evolving culture of England in the Middle Ages.

In this episode, we explore the state of the English language outside of England in the early 1300s. This story takes us to the regions where Celtic languages were traditionally spoken. In some of those regions, English had little or no influence. But in parts of Scotland, English had been a native language since the Anglo-Saxon period. During this period, the Scots were engaged in a battle for independence from England, and that struggle was captured in the first piece of literature in the emerging Scots dialect of English.

For much of human history, common measurements of length were based on body parts and were variable from region to region. Most other measurements were also inconsistent. During the 1300s, these measurements started to be fixed and standardized for the first time. In this episode, we look at those developments, and we explore the history of our words related to measurements.

The words for numbers are some of the oldest and most conservative words in most languages.  The English words for numbers can be traced back to the original Indo-European language, but during the early Middle English period, English speakers began to borrow related number words from Greek, Latin and French.  At the same time, the modern Hindu-Arabic numerals were making their first appearance in English documents and inscriptions. In this episode, we explore the history of numbers and the words we use to express numerical concepts.

In this episode, we turn our attention to the south of England and examine some of the unique features of the Middle English dialects spoken there after the Norman Conquest.  We also take a look at a poem composed in the Southern dialect called “The Fox and the Wolf.”  Finally, we explore how developments in this region informed some of the modern differences between northern and southern speech in Britain. 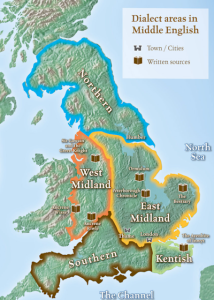 At the dawn of the 14th century, Edward I was forced to deal with a popular uprising in Scotland. At the same time, a poet in northern England composed the oldest surviving poem in the Northern dialect of Middle English called the Cursor Mundi. In this episode, we turn our attention to northern England and Scotland, and we examine the unique features of this northernmost dialect of Middle English.

Thanks to WhatPods.com for including the History of English Podcast on its list of the best history podcasts!

One of Edward I’s most notable accomplishments as King of England was the conquest of Wales, and his desire to extend that authority to the north of Britain led some to call him “The Hammer of the Scots.” But beyond Edward’s attempts to rule all of Britain, he is probably most well-known for his legal reforms including a series of statutes passed early in his reign. As king, Edward was the supreme judge of England. There was no appeal from his decisions. In that regard, Edward thought his legal authority extended to Scotland as well. He even used that authority to decide a dispute over the kingship of Scotland. Edward’s aggressive policies ultimately led to war with his northern neighbor, and in many respects, that war was rooted in this dispute over legal jurisdiction. This time, we’ll explore those events, and we’ll see how Edward’s legal reforms impacted the English language.