The modern French language evolved from a Latin dialect spoken in Gaul during the period of the late Roman Empire. That language ultimately became mixed with Old English after the Norman Conquest of 1066. Approximately half of the words in conversational English come from French.  So in this episode, we explore the ultimate origins of the early Romance dialect known as ‘Old French.’  We also examine the impact which the early French language had on English. And along the way, we look at the evolution of the Frankish kingdom from Clovis to Charlemagne.

Long before the Normans arrived in England, the Anglo-Saxons were borrowing Latin words from the monastic culture which was emerging in the 7th and 8th centuries. In this episode, we explore the spread of monastic schools and scholarship in Anglo-Saxon Britain, and we examine many of the Latin words which were borrowed during the period of Old English.

The early Christian Church in Britain gradually embraced English as a way to spread to the message of the Church to the masses.  This required the translation of Christian words and concepts from Latin into English.   In this episode, we explore how English was used to represent the new religious ideas which were rapidly expanding across Britain.  We also explore the many words and phrases which originated from this process and which still exist in Modern English. Check out the ‘Texts’ tab for the written version of Caedmon’s Hymn and the Ruthwell Cross inscription discussed in this episode. 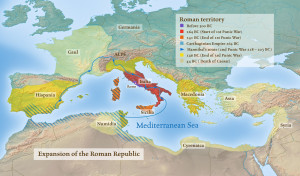